When Joy Morton's son, Sterling Morton, became the chairman of the Board of Trustees, he was invested in growing The Morton Arboretum's research capabilities, particularly in regards to Dutch elm disease. He initiated plans for a research wing addition to the Administration Building. In 1955 construction began on the addition, which was designed by Holabird, Root and Burgee. Its exterior was limestone to match the Administration Building, but unlike the main structure, it had a flat roof, necessitating the replacement of the Administration Building's steep roof. Additionally, the building's main entrance was redesigned with a double wind-lock doorway. The research wing's main features were a glass rotunda that looked onto the Hedge Garden and an auditorium named for Sterling Morton's sister, Jean Morton Cudahy. Below the auditorium was a large classroom, while the main floor included a reception area, offices and laboratories. The upper floor comprised a library stack room and guest rooms. The wing was dedicated in 1956 on Joy Morton's birthday, September 27, and the whole complex was renamed the Arboretum Center.

As the Arboretum's research program grew, so did its needs for modern facilities. Sterling Morton's widow, Preston Owsley Morton, had provided a generous gift to the Arboretum in her will, which made a new Research Center possible. Like the research wing that preceded it, the new Research Center was attached to the Administration Building/Arboretum Center. The three-story building, designed by Keiser and Associates of Geneva, Illinois, housed staff offices, an herbarium, three classrooms, an attached propagation headhouse, and rooms for growth chambers and a scanning electron microscope. It included laboratories for research on soils, plant pathology, chemotaxonomy, wastewater treatments, as well as a botany teaching laboratory. Each floor of the building featured a different type of wood for its interior trim: red oak in the basement, elm on the first floor, butternut on the second, and cherry on the third. On July 17, 1982 the Board of Trustees, staff, members, and guests celebrated the dedication of the Research Center.

In 2000 the Administration and Research Center's entrance was redesigned, featuring a peaked gateway with transparent panels that replaced the original research wing's glass rotunda. 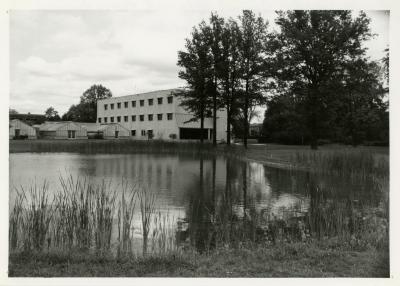