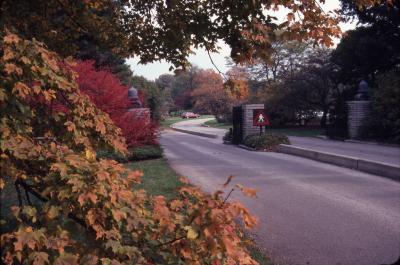 To enter The Morton Arboretum, visitors travel along Illinois Route 53, turning onto Ginkgo Way at the Park Boulevard intersection. After driving under a leaf-patterned arch, visitors are welcomed by an attendant at one of three gatehouses, and then can choose to stop at the Visitor Center, turn left to explore the East Side, or turn right towards the underpass leading to the West Side. However, like the Arboretum itself, the route into this "great outdoor museum of trees" has developed over time.

A 1925 map drafted by the Arboretum's superintendent, Clarence Godshalk, shows that the Arboretum's main entrance was at its southern boundary on the west side of Joliet Road (now Illinois Route 53), passing right by Godshalk's house. In 1932, a gravel entry road from Route 53 to the Arboretum's East Side was constructed, near the site of the Administration Building. Both entrances were fitted with limestone gate posts, ornamental rail fences, and rustic sign posts in 1933. At the time, these entry roads were about a mile north of Ogden Avenue in Lisle and three miles south of Roosevelt Road in Glen Ellyn.

While Route 53 has long been the main access point to the Arboretum, there have been other entrances as well. From approximately 1930-1933, there was an entrance at the Arboretum's far southeast corner off of Ogden Avenue, which was later used as a service road. A letter written by Godshalk also mentions an entrance at Warrenville Road. However, the Park Boulevard entrance is likely more familiar. This was the original entrance to Thornhill, Joy Morton's country estate, and later the site of the Thornhill Education Center. It was closed to the public in 1971, so that all visitors would use the main gates on Route 53.

The widening of Route 53 in 1959 necessitated major updates to the Arboretum's entrances. Cloverleaf entrances were built on both side of Route 53, as well as gatehouses and an underpass connecting the Arboretum's two sides. The entryways received a new look in the early 1960s. In 1962, the Arboretum installed a 75-foot flag pole and a prominent sign. Suzette Morton Davidson commissioned eight acorn finials created by Sylvia Shaw Judson, which adorned the entrance gate posts. These sculptures are now displayed in Arbor Court near the Visitor Center.

The existing entrance, completed in 2003, took shape as part of the Branching Out! capital campaign, which, in addition to reconfiguring the entrance, also helped fund the Children's Garden, the redevelopment of the Visitor Center, and other site changes. Working with DuPage County officials and the Illinois Department of Transportation, the Arboretum constructed its new entrance further north at the intersection of Park Boulevard and Routh 53 with a traffic signal and turn lanes to allow for easy access to Ginkgo Way, the Arboretum's entry road, which leads to the East Side. There is an archway composed of metal panels, laser-cut with leaf motifs, creating the effect of light filtering through a tree's canopy. David Woodhouse Architects designed the arch and three gatehouses, and Christopher B. Burke Engineering designed the entrance bridge, which spans the East Branch of the DuPage River.