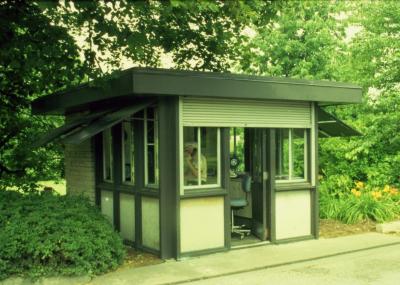 When Illinois Route 53 was widened in the late 1950s, it initiated several changes in The Morton Arboretum's entrance system. In addition to constructing cloverleaf entrances on either side of Route 53, the Arboretum also built gatehouses, also called control houses, to monitor admission. Prior to the establishment of the gatehouses, admission to the Arboretum had been free. Starting September 1, 1961, the Arboretum charged 50 cents per car or visitors could purchase a season sticker for $2.50.

Designed by Holabird and Root, the first gatehouses were constructed in 1960. The East Side's gatehouse was located near Meadow Lake and what was then Parking Lot 20. There was a gatehouse on the West Side as well, north of Godshalk Meadow and just south of the East Branch of the DuPage River. In 1962, the Arboretum's director, Clarence Godshalk, reported that the gatehouses were a great success.

We have had a full year's operation of the two Control Houses and are greatly pleased with the result. Vandalism has been at a minimum, and the profit has been ample to pay other grounds patrolling as well as annual road maintenance.

Years later, the Arboretum designed a new entrance layout, funded and constructed as part of the Branching Out! capital campaign. Located on the Arboretum's East Side at the intersection of Route 53 and Park Boulevard, the new entrance, bridge, and gatehouses opened on November 10, 2003. With the opening of the new gatehouses, the Arboretum also implemented a different system of admission, charging per person rather than per car. The new admission system also introduced scanning members' bar-coded cards to admit members for free.

David Woodhouse Architects designed the three gatehouses, which each have their own entrance lane and can be staffed according to demand, improving traffic flow and the admission process. As attendance has risen, the gatehouse staff have worked to further increase the efficiency of the admission process. On the Arboretum's busiest days during the Fall Color Festival, gatehouse staff would work the lines ahead of the gatehouse on foot to distribute maps, answer questions, and direct members to a special lane, reducing wait time by as much as fifty percent. This system was enhanced in 2019 when gatehouse attendants started using mobile tablets with a secure Wi-fi connection to process payment more efficiently. Gatehouse admissions were also streamlined when same-day and advance admission tickets were made available for purchase online in 2016. When the Arboretum reopened after the Coronavirus pandemic forced it to close for two months in 2020, the Arboretum transitioned to timed ticketing to comply with Coronavirus guidelines and capacity limits. In 2022, the Arboretum decided to retain the timed ticketing process because among several advantages, it greatly reduced wait-times and eliminated traffic backups.