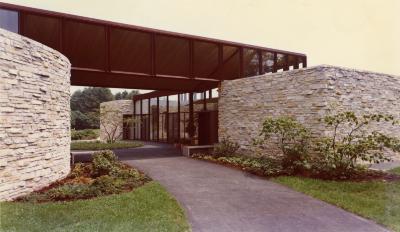 Arthur Myhrum was hired as the architect for the new Visitor Center. Building and construction began on the Arboretum's East Side in 1971, with new drives, walks, and parking areas added to the area in 1972. The Visitor Center was dedicated to the memory of Preston Owsley Morton (1890-1969) on April 12, 1973, and opened to the public on April 15, 1973.

The original facility combined three single-story units, situated around a garden court, with covered passageways connecting the units. Inspiration for this style came from a tripartate building that Arthur Myhrum had seen in Mexico on a previous trip. Lannon stone was used to match the exterior of other Arboretum buildings already on the grounds, however, Arthur Myhrum also incorporated CorTen steel in the window frames and courtyard overhead girders to tie the Arboretum to the City of Chicago, the same material used for the Daley Center and Picasso sculpture.

The Visitor Center was a much needed addition to the Arboretum with a growing number of visitors coming to the Arboretum each year, offering an Information Building, Theater, and Restaurant. The Information Building consisted of an exhibit space, counter for information and sale of publications, slides, and postcards, restrooms, and staff office space. The Theater,  with a capacity of 60, presented 15 minute multi-media presentations to orient visitors to the Arboretum. The Restaurant comprised of two facilities, including the Ginkgo Tea Room directly overlooking Meadow Lake for lunch or afternoon tea, and Evelyn's Pantry with a more informal à la carte menu.

Over the years, the Visitor Center saw many changes, including the remodeling of the Ginkgo Restaurant and the opening of the Ginkgo Shop (later called The Arboretum Store) in 1979, as well as several moves for the Ginkgo Shop within the Information Building to facilitate its need for a larger space. The Theater was closed and its space converted to a larger information services area in the mid 1990s.

The Visitor Center's most recent redevelopment and expansion (designed by David Woodhouse Architects) took place over several years as part of the Branching Out campaign, and was completed in 2004. The space grew from approximately 15,000 to 36,000 square feet, and transformed into two separate pavilions connected by a covered walkway. In the West Pavilion, a larger Plant Clinic was introduced, Security Services offices were built, and an 1,800 square foot Special Events Area was now available to visitors. The East Pavilion held a large Orientation Hall with an Information Desk, open seating space, and a 70 foot long interpretive display. The East Pavilion was also home to an expanded Ginkgo Shop, Visitor Services offices, a coffee bar, and the Ginkgo Restaurant with additional rooms for private functions overlooking Meadow Lake.