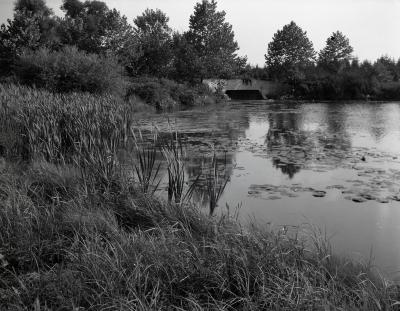 Named for Joy Morton's second wife, Margaret Gray Morton, Lake Marmo was the first man-made lake constructed at The Morton Arboretum. Designed as an aesthetic feature, the lake occupies what was once the streambed of Willoway Brook, a tributary of the DuPage River. In early September 1921 the Arboretum's advising landscape architect, O.C. Simonds, and his men staked out Lake Marmo. Supervised by Simonds, Yale and Regan Construction Company began digging the lake around September 10 with teams of mules. That fall, Yale and Regan also built the lake's dam and outlet bridge. They finished the construction of the lake by the 1922 planting season and also graded and built the artificial hills that surround the lake. In the spring, the road leading to and around Lake Marmo was constructed.

Over many years, the lake experienced sedimentation issues that required frequent maintenance, so Sterling Pond was built in 1961 as a catch basin. The name "Marmo" was also given to the Freeman Maple cultivar propagated by the Arboretum, Acer xfreemanii 'Marmo' (Marmo Freeman's maple), which can be found on the west side of Lake Marmo.