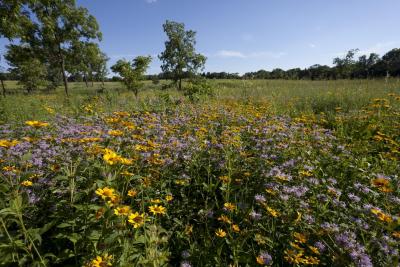 When Joy Morton decided to build his home on the land that would become The Morton Arboretum, the area was mostly farmland. However, prior to European settlement, eastern tallgrass prairie covered 66% of the Chicago region's landscape. In 1962 Arboretum director, Clarence Godshalk, had a vision to create a "native planting" on farmland that had been acquired in the late 1950s on the Arboretum's western edge. He put assistant propagator, Ray Schulenberg, in charge of this task and gave him the title, Curator of Native Plants. He began to collect seeds in the fall of 1962, most of which came from within 50 miles of the Arboretum.

In the spring of 1963 Schulenberg began to plant local species in a small area north of Willoway Brook, called "the Acre," making the reconstructed prairie the fourth oldest of its kind in the Midwest. The prairie, which now spans about 100 acres, contains several reconstructed habitats including savannas, tallgrass prairie, and a wet prairie along Willoway Brook. Upon Schulenberg's retirement in 1987, the prairie was named in his honor, and in 2002 the Arboretum's Prairie Visitor Station opened as a gateway to the prairie.