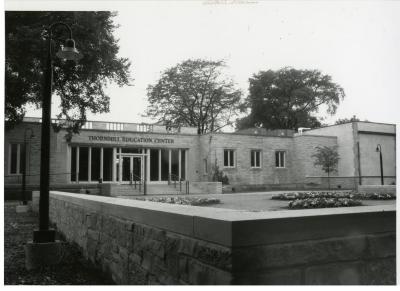 When Joy Morton established his country estate in 1910, he named it "Thornhill" because it stood atop a slope overlooking beautiful hawthorn trees. Jarvis Hunt designed the half-timbered stucco home as well as its 1912 addition. Another wing, designed by Frank W. Perkins, was added in 1915. Although it was chiefly a family home, Morton envisioned Thornhill as an integral part of the Arboretum when he added the library in 1923, the first major building constructed specifically for Arboretum use.

After Joy Morton's widow, Margaret Gray Morton, passed away in 1940, Thornhill became property of the Arboretum. In addition to suffering from a crumbling foundation, the Thornhill residence was not adaptable to the Arboretum's needs, particularly for its growing education program. Consequently, the house was razed in 1941 except for the library wing, which is now known as the Founder's Room and Godshalk Hall. The trustees commissioned Holabird and Root to design an education center that connected to the Thornhill library. Constructed of Lannon stone, the new education center was situated similarly to its predecessor; like the former residence, its main entrance faced north and the building showcased the beautiful view of the hawthorn-dotted slope that attracted Joy Morton to the location. It featured a large lounge that could be reconfigured to a lecture room that seated 250 people, and the library underwent renovations that included a new roof, ceiling, and floor. Taking the name of the residence that it replaced, the Thornhill Building opened on August 15, 1942.