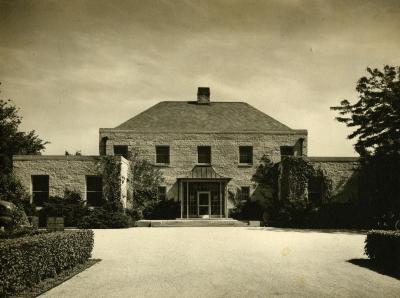 After Joy Morton's passing in 1934, his daughter, Jean Morton Cudahy, became chairman of the trustees. One of her first projects as chairman was to oversee the construction of the Administration Building, which helped facilitate the Arboretum's transition into a truly public institution. Holabird and Root, the architectural firm that designed the Thornhill library, was commissioned for the project. Located on the Arboretum's East Side, the symmetrical building was made of Wisconsin limestone and had a steep central slate roof. A copper-roofed canopy adorned the entryway, supported by columns enhanced with leaf imprints made from specimens collected on the grounds. The interior featured a butternut-panelled foyer and a terra-cotta brick floor. In addition to office space, the building included a central information desk, a library, an herbarium, a trustee's room, and two small staff apartments on the second floor.

Sterling Morton, Joy's son and Jean's brother, became the trustee chairman in 1953 after Jean's death. He oversaw the Administration Building's first addition--a research wing. Like the original structure, the research wing's exterior was made of limestone. The addition included a reception area, offices, and laboratories on the main floor and a library stack room and guest rooms on the upper level. To match the flat roof of the new research wing, the Administration Building's steep roof was redesigned and its canopied entryway was replaced with a double wind-lock doorway. The complex, renamed the "Arboretum Center," was dedicated in 1956 on Joy Morton's birthday, September 27.

When Sterling's daughter, Suzette Morton Zurcher, became the chairman in 1961, she followed in her predecessors' footsteps by initiating another addition to the building. With funds donated by her mother, Preston Owsley Morton, Suzette helped establish the Sterling Morton Library, attached to the building's north side. Dedicated in 1963, the library was designed by Harry Weese and included a walled reading garden, named in honor of May Theilgaard Watts, the Arboretum's noted naturalist. In 1964 the Ginkgo Tea Room opened on the Arboretum Center's second floor, with the Ginkgo Gift Shop below. However, as the number of visitors and Arboretum staff increased, the spaced was converted into offices, and the eating facility and gift shop found a new home in the Visitor Center, which opened in 1973.

The Administration Building's next major addition was the Research Center, dedicated in 1982. The three-story addition on the building's south side included staff offices, an herbarium, three classrooms, laboratories, an attached propagation headhouse, and special rooms for growth chambers and a scanning electron microscope. In 2000 the Sterling Morton Library introduced its new Special Collections addition, which houses the library's rare books and archival materials. At this time, the Arboretum also opened a new entryway to the building, featuring a peaked, transparent gateway and a lounge area for visitors.