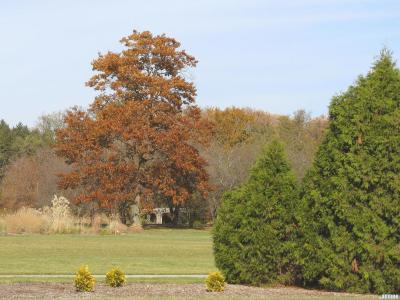 The area just west of Route 53 and north of Arbordale was referred to as CEG Meadow as early as 1955. CEG are the initials of The Morton Arboretum's director from 1939-1966, Clarence E. Godshalk, who lived in a red-brick house that was located at the southeast corner of the meadow for many years. Formerly a hayfield, plans for the meadow began in 1922. Initially it was the site of the lilac collection, however, the collection was later moved because the lilacs sometimes suffered damage from the spring frosts in the low-lying area. Arboretum guides used to point to the meadow as an example of informal "English-style" landscaping, but by 1979 it was in need of rejuvenation due to plants that were overmature, diseased, or invasive. The Arboretum's landscape architect, Anthony Tyznik, oversaw these revitalization efforts.

In 1998 the north edge of the meadow was identified as a favorable site for evaluating new shrubs. It has continued as a site for new planting. Susan Jacobson, landscape architect, designed a shrub trial garden for the meadow in 2013, and new plant evaluation beds were added as part of the New Plant Development program in 2016.