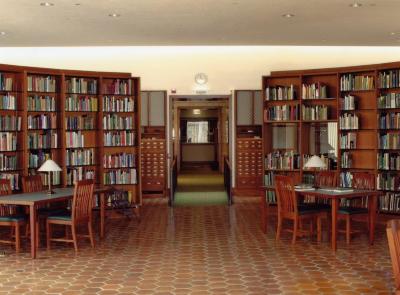 Specifications for alterations and additions to the Morton Memorial Library

Although the Sterling Morton Library opened in 1963, the library's history is linked to The Morton Arboretum's founding in the early 1920s. As Joy Morton made plans for the Arboretum, he took advice from the Arnold Arboretum's director, Charles Sprague Sargent, who suggested that Morton should include a library in his plans. Morton embraced this idea wholeheartedly and commissioned the first major structure built specifically for the Arboretum--a library wing adjoined to his Thornhill residence. In 1922 Morton authorized Sargent to collect and purchase books for the library. In addition to the Morton family's existing library, the collection included duplicates from the Arnold Arboretum's library and books from private English libraries that were dissolved after World War I. The historic library wing, now known as the Founder's Room, still stands today as part of the Thornhill Education Center.

The Morton Arboretum quickly grew and in 1934, Jean Morton Cudahy, Joy Morton's daughter and chairman of the Board of Trustees, commissioned the construction of the Administration Building, located on the Arboretum's East Side. This new structure included a small library, though most of the rare books remained at the Thornhill library. Some years later, the succeeding chairman, Sterling Morton, expressed a wish to consolidate the ever-growing collection into a central library. He passed away in 1961 before this could take place, so his wife, Preston Owsley Morton, and their daughter, Suzette, built a library addition to the Administration Building and named it in his honor. Designed by Chicago architect, Harry Weese, the Sterling Morton Library opened in 1963. The library's reading room today looks much as it did then: an oval-shaped room with curved freestanding cherry bookcases and a ceiling that appears to float. At this time, the May T. Watts Reading Garden, located just outside the library, also opened.

Suzette's successor as chairman, Charles C. Haffner III, also made his mark on the library by funding a secure, climate-controlled addition to the library to house its special collections, such as art and rare books. Construction began on the addition in 1999 and was completed in 2000. The Suzette Morton Davidson Special Collections were named in honor of the former chairman. When Haffner passed away in 2012, the special collections reading room was name for him.