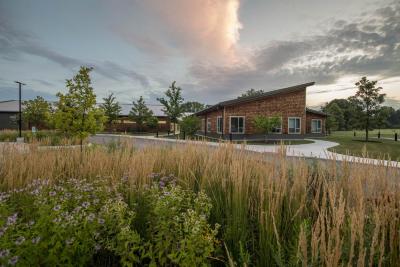 Prior to The Morton Arboretum's founding in 1922, much of the land that now comprises the Arboretum was farmland. In addition to the Arboretum, Joy Morton owned and operated several farms with names like Thornhill Farm, Home Farm, Arbor Farm, and South Farm. Early on South Farm became the center of operations for the Arboretum. Staff members and their families lived there as early as 1921 and before long the South Farm buildings housed an office, a tool room, and the herbarium.

In 1944 the Arboretum gained ownership of all of Morton's farms and continued to operate them under the name Lisle Farms until 1954. Around that time the Arboretum began to remodel South Farm and moved several of the staff houses to the new Arbordale development due to the widening of Illinois Route 53. South Farm's barns continued to be used for employee facilities and a mechanics' shop which led to a renovation project that was completed in 1987.

As the Arboretum grew, so did its staff and the need for modern facilities. The new South Farm buildings were one of the main projects funded by the Growing Brilliantly campaign. The project, which was completed in 2017, included a 39,000 square foot Vehicle Storage Building and a 38,000 square foot Curatorial and Operations Center, located at the site of the original South Farm buildings. The Curatorial and Operations Center houses offices, meeting spaces, a vehicle repair area, carpentry shops, and equipment storage while the transportation building contains the Arboretum's fleet of vehicles that are necessary to care for the Arboretum's 1,700 acres. The South Farm complex is a work hub for the arborists, horticulturists, gardeners, carpenters and mechanics who take care of the Arboretum.