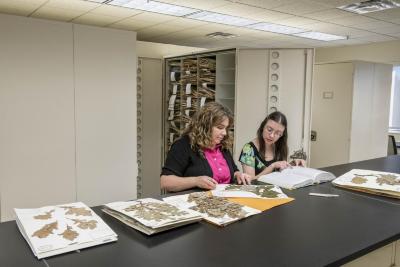 The herbarium was integral to Joy Morton's original plans for The Morton Arboretum. Though the word "herbarium" may lead one to think it is a garden of culinary and medicinal herbs, it is in fact, " a collection of plant specimens, preserved--usually by pressing and drying--and arranged systematically for reference. The word herbarium is also used to refer to the place where such a collection is housed.

The collection of specimens for the herbarium began in 1922, the year of the Arboretum's founding. After he was hired to be the Arboretum's botanist, Henry Teuscher's first stop on his way from Germany to the United States was not in Illinois, but at the Arnold Arboretum in Massachusetts. He spent some time there to collect specimens before making his way to The Morton Arboretum. In 1923, Teuscher began collecting at The Morton Arboretum while the Arnold Arboretum continued to send duplicate specimens. Additionally, The Morton Arboretum's herbarium grew by several thousand specimens collected by Ernest J. Palmer as he traveled throughout North America. By March 1929, the collection consisted of approximately 10,000 specimens that were housed at South Farm's "old milk house" in wooden cabinets.

E. Lowell Kammerer, the Arboretum's arboriculturist, oversaw the collection's relocation to the new Administration Building in 1935 where the specimens were stored in custom-made metal cabinets. The space included two staff offices and a circular iron staircase that led to a basement workroom. The Sterling Morton Library was built adjacent to the herbarium in 1963 and a few years later, the herbarium was converted into library offices. In November 1968 the herbarium collection was moved to the classroom below the auditorium (Cudahy Room). The herbarium collection was moved again when the Research Center opened in 1982. Soon after, the herbarium celebrated the addition of its 50,000th specimen in October 1984.

The herbarium continues to be housed on the third floor of the Research Center, but the collection became accessible to the whole world in 2002 when The Morton Arboretum helped launch vPlants, an online database of plant information. Today The Morton Arboretum's herbarium is the third largest arboretum herbarium in North America, consisting of over 200,000 dried plant specimens with a particular focus on woody plants in the Chicago region.