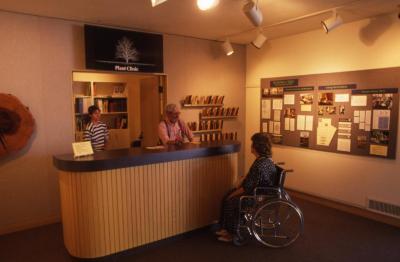 Even before the Plant Clinic's official establishment in 1968, The Morton Arboretum has provided plant information to the public. Throughout his employment from 1929 until his death in 1966, E. Lowell Kammerer answered questions regarding horticulture via telephone and at the Information Desk located in the Administration Building. After his passing, request for plant information continued to increase; however, staff members were not always available to take calls. Consequently, a proposal was made in 1967 to establish official Plant Clinic hours.

The Plant Clinic began to accept inquiries in 1968 from April to October on Monday, Wednesday, and Friday afternoons. Led by the head of applied research, Web Crowley, five staff members rotated shifts in answering plant information questions received by mail, phone, or in-person. In addition to receiving inquiries, the Plant Clinic published sixteen Information Leaflets based on the most commonly asked questions.

In 1971 the Plant Clinic established its physical presence behind the Administration Building's reception area. For a short time in 1982, the clinic was located in what was called the Map Room (now the Volunteer office), but it soon moved to the main room of the Administration Building (now part of the Development office) in 1983. At this time, Plant Clinic staff included employees from the Education, Research, and Collections departments. Over the years, the number of Arboretum employees staffing the Plant Clinic increased as did its hours. Staff members continued to create and update its publications.