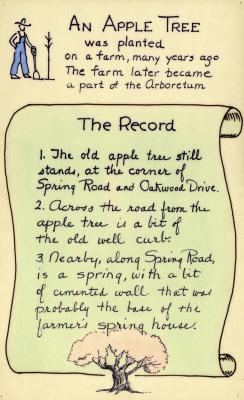 Arboretum Landscape Teaching Aid Series: An Apple Tree was Planted on a Farm

black marker and watercolor on illustration board

Primarily textual teaching aid depicting Arboretum landscape. This material describes the remains of the farm that later became the Arboretum, including an apple tree that still stood at the time.

[Illustration of a farmer with a shovel standing next to a sapling] Header: AN APPLE TREE was planted on a farm, many years ago / The farm later became a part of the Arboretum

Text and illustrations from top to bottom: