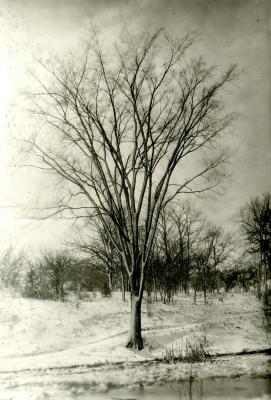 b&w photographic print mounted on board

American elm on Lake Marmo after 1922 relocation with lengthy handwritten commentary on board. Describes moving tree under direction of O.C. Simonds. Note adds tree helped C.E.Godshalk become Arboretum superintendent in May 1922. Drawn illustration of move on back of board.

Written on front of board
"This tree was most important tree of all trees in CEG's mind. It helped him more than anything else to become Arb Sup't in May 1922."
"This tree died of Dutch Elm Disease years later 1950's."

Written on back of board
"In spring of 1922 when Mr. Senn was sup't, the road around Lake Marmo was to be made and a 6-8" diam Amer. Elm #1 was in the roadway. Mr. O. C. Simonds, who was in charge assigned the job of moving the elm to location #2 (above drawing) which meant it had to be dug with a ball about 6' in diameter and about 2' deep. It then had to be loaded onto a stone boat or flat skid, and moved upright through the hawthornes that were zig-zag opposite each other. It could not be moved lying down because it would break the then, wide ball and roots. A team of horses was his only power to move the tree.
He loaded it toward the front of the stone boat so the weight made the stone boat dig in the ground & the horses couldn't pull it. Secondly he had no guy ropes to the tree top to guide it between the hawthornes. About that..."